Don was having issues with his furnace. “The furnace would heat up and then it would cool down. No matter what we set it at, the temperature in the house dropped into the 50’s for a while and then it would kick back in again and run for a while, and then go back into that same mode and drop back down. I think … it was just slowly dying on us.”

When he and his wife thought about what they should do, he said “Last year we had a problem with it, and we had somebody from another company come out and they had to replace a major part. The furnace was 20 years old and due for a replacement. I was hoping to get through the winter, but it started to act up again.”

That is when Don thought of his great experience with the Bonfe sewer team earlier that year and decided to call for furnace service “The technician came out and was so thorough. He went through and took pictures of it; he showed the parts of it that were wearing out and he said it may last the winter and it may not … He laid out all these different options we had. There was no pressure to it at all. It was a great value for the furnace with the A/C, so we went ahead and went with that.”

Replacing both your Furnace and A/C is no small task, but Don was left feeling confident in his choice after working with the Bonfe technician. “We sat down and had coffee over it. He was here for well over an hour explaining everything. The cost, taxes, permits, everything. When he was done, we didn’t even have a question. He answered everything.”

Bonfe offers a variety of heating and cooling equipment options, so Don and his wife had a decision to make. And after living in their home for almost 47 years, they knew the value of high-quality work and equipment. 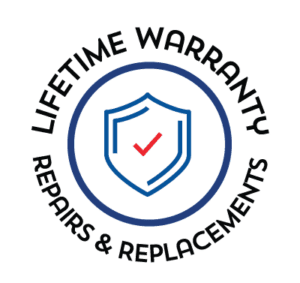 When it came to the equipment they chose, he said “I’ve always believed in spending the extra dollar for something that’s a little bit better value, more efficient. And that’s what we went with was a high efficiency furnace … Plus, there was the lifetime guarantee on that unit.” Now that the new furnace is installed, Don and his wife have noticed a difference in the quality of their equipment. “This furnace has a 2-speed motor in it. And if you turn the thermostat up 2-3 degrees, the 2-speed motor heats the house up quicker.”

Don had his furnace installed over the holidays. “I was surprised that they could get us in on their schedule … When they said, “We could do it next week.” I was really impressed that they had a schedule they could open up for me because my furnace was in tough shape. So, I really appreciated that.”

When talking about the install day, Don said “They were here for 4 or 5 hours and completed everything … The two of them, they were hand-in-hand and knew exactly what the other one’s strengths were and they were done in about 4 hours, and we had heat up and running.” 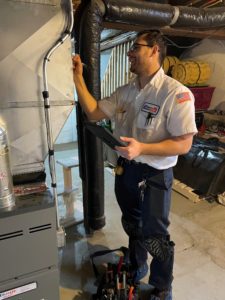 “Bonfe was so professional. Everything was installed and when they were done … it was spotless. They took their time hauling the furnace out of the house, so they didn’t hit any of the walls or the doors.”

“One of the installers was a big ice fisherman, like I am. And we’re having a cup of coffee and talking a little ice fishing. I bought a new fish finder, and I had problems getting it to work. He sat down and within 2 minutes, he fixed it. Great personalities, great work ethic, on time, and in the end, he even got my fish locator to work.”